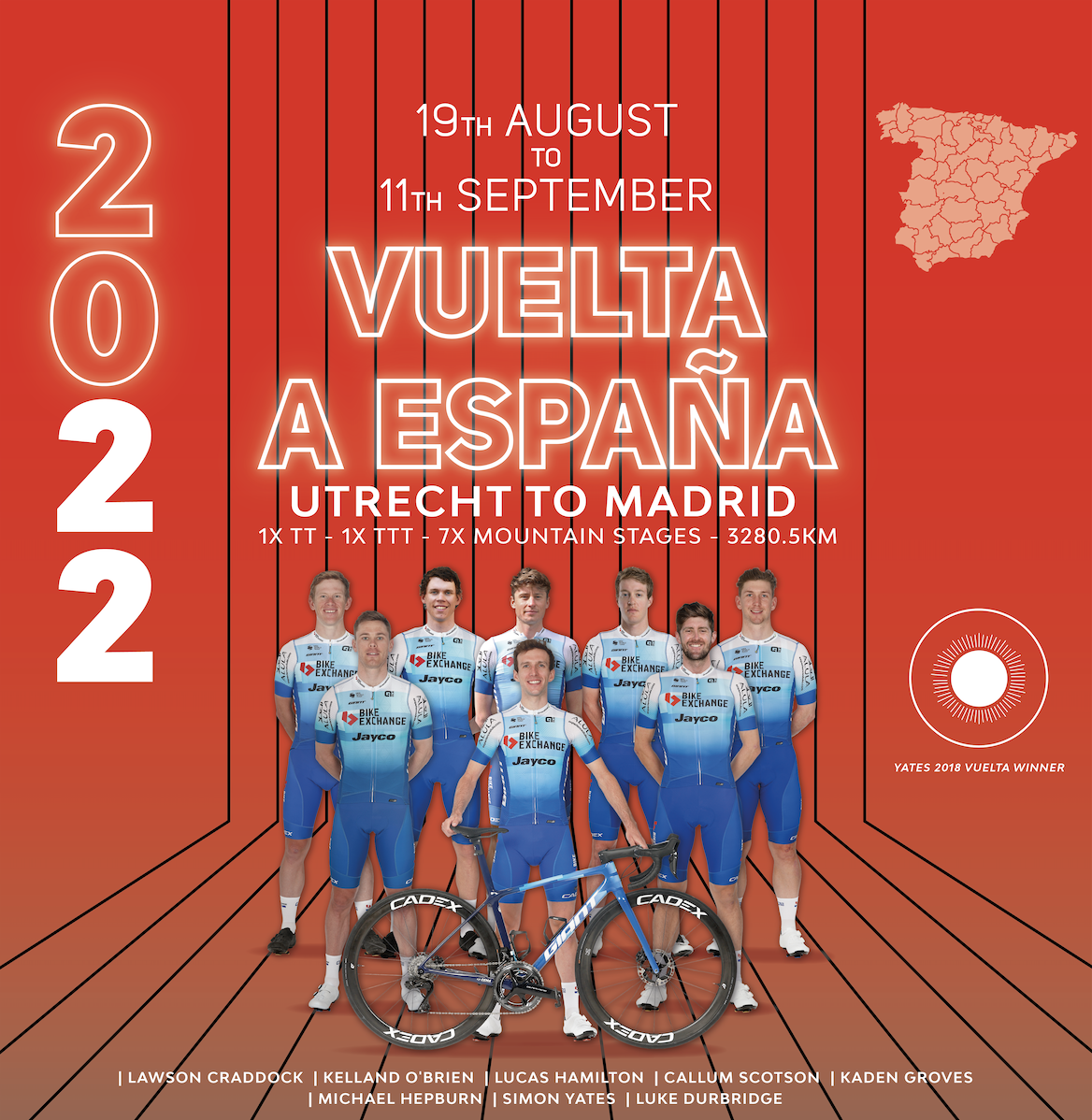 Team BikeExchange-Jayco has named its eight-rider squad for the 2022 Vuelta a España today, headlined by 2018 champion Simon Yates, with ambitions of taking a second overall victory in the three-week Spanish Grand Tour, which starts on Friday, 19th August in Utrecht, Netherlands.

The predominantly Australian team line-up will have the main goal of supporting Yates on his quest for a high general classification placing, with Kaden Groves making his Grand Tour debut and complimenting the team, to give a secondary option to challenge for sprint stage victories.

Well-Rounded Squad
For the high mountains, Australian climber Lucas Hamilton will be there to support Yates alongside a strong and experienced ‘engine room,’ consisting of American Time Trial champion Lawson Craddock, plus Australian powerhouse Callum Scotson and La Vuelta debutants Michael Hepburn and Luke Durbridge. In a cross-over role, track specialist Kelland O’Brien will form part of the engine room whilst also playing a key part in the sprint finishes, to support fast-man Groves.

A Mixed Bag
Beginning with a team time trial, the first WorldTour TTT of the 2022 season, ambitions are high with a stage victory the team’s goal. The race then enjoys two more flat and potential sprint stages in the Netherlands, before transferring to northern Spain ready for more flatter stages, before a trio of summit finishes on stages 6, 8 and 9. An important and testing individual time trial then comes after the first rest day when the peloton heads to the south of Spain, ahead of four more hard summit finishes, with sprint stages sprinkled throughout the route towards the traditional final stage in Madrid.

Brent Copeland – General Manager
“We head to the third and final Grand Tour of the season with high motivation after enjoying a successful season so far with stage wins in both the Giro and the Tour de France. For the Vuelta we have a fairly young team with some riders making their Grand Tour debuts and it is exciting for us as an organisation to see what they can do. With great options to challenge for stage wins in the climbs and on the flat, we believe we have put together a really strong team that is very diverse and can achieve a lot in this Spanish Tour.”

Gene Bates – Sport Director
“Our goals are pretty straightforward; we have a double approach in going for stage wins with sprinter Kaden Groves and stage wins and a strong overall showing with Simon Yates. It will be Kaden’s first Grand Tour, he is fast and, on his day, when he is in top form he is fast enough to win, so we have high expectations for him. With Simon, we know what he is capable of, he has won the Vuelta before so we are going in looking for the best overall, we can.

The horsepower we have in the team is enormous, so we will try to hit the ground running in the TTT and get the momentum going straight away. There is a lot of climbing in this edition, the individual time trial stage is a lengthy one so that will be important for the overall. It isn’t like the Giro or the Tour where you have real key climbs with the Alps then the Pyrenees, there’s sort of rogue stages in there that could turn the race on its head if you get caught out. The stage to Sierra Nevada will be a key stage but also stages in Asturias will be particularly difficult but make for some great and entertaining racing.”

Simon Yates – 2018 La Vuelta Champion
“I’m looking forward to the Vuelta this year, of course I have great memories from the race after the win in 2018, so it is always special to return. It is going to be a really hard edition, starting with a TTT but we have a really strong team and I think we can get the tour off to a good start with this stage in particular and the strength in the team line-up that we have.

After the Giro I had time to recover and re-build and it was good to start back racing again in Castilla y Leon and San Sebastian, so I am feeling ready for the Vuelta now. There’s a lot of climbing, especially in northern Spain and in general, it looks like a really hard and challenging course. We are going there to win, the team has had a great season so far, so the morale is high, and we are all motivated to finish the season off well with this last Grand Tour.” 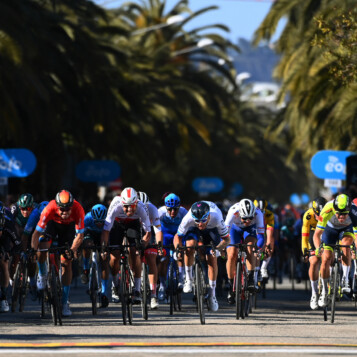 Groves caps off Tirreno-Adriatico with second podium of the week 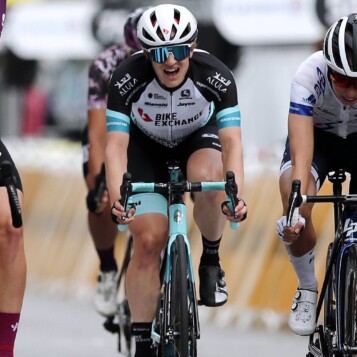